Hay for ruminants – of course not only cows, but also sheep, goats, calves, deer, etc., prefer, in contrast to the horses a very different hay. On the basis of facts, we will explain which hay is best for cow, sheep and goats.
Hay for ruminants, cows, sheep, goats … should have high nutrient contents (protein, energy) as well as high confidentiality. The feeding of farm animals falls under the feed legislation. Accordingly, the limit values ​​for feeding must not be exceeded. Each farmer’s goal is to gain as much milk or meat as possible from the animal. Not too long ago the ARGE Heumilch published the information that from hay feeding alone up to 6000 kg/milk per cow and year can be generated. Mind you: without any concentrate feed!

The cutting time of the hay is absolutely decisive. The cutting time determines how many nutrients and energy the cropped plant carries within itself. In the so-called “ears panicles emergence” we get an optimum amount of yield and confidentiality and about 15 liters of milk per cow and day. As soon as approximately 50 per cent of the guide-grasses of the stock are pressed out from the leaf sheath, it is known as ear emergence. If only mowed in the bloom, the milk output is reduced to only 5 liters per day. This comparison makes it very clear how important the cutting time for the profitability of a farm is. If the cutting time is well chosen and the weather as well allows to mow, we can save a lot of money on the concentrate feed. Advantages arise, of course, for all companies equipped with hay drying since they are able to choose the cutting time better due to the weather independence.

Time to leave it on the field 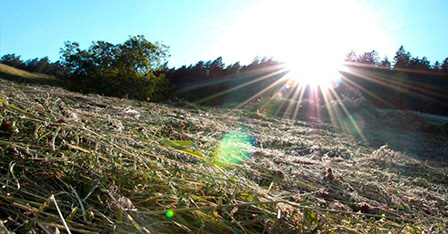 The more often the hay is to be turned with the rotary tedder, the higher the leaf losses and thus the energy losses of the feed.

This is to be considered as very variable. Depending on the weather, this varies between 2 and 4 days for ground hay and between 1 and 2 days for machine dried hay. The main difference between these two hay varieties is the machine processing on the field. Logically, the rotary tedder is often used to turn the hay.

Depending on the personal experience, the hay is turned at least once with the rotary tedder. The main problem occurring with rotary tedders is a so-called crumbling loss while continuous drying. Those occur particularly often from a residual moisture content which is less or equal to 35%. In the case of the so-called crumbling losses, the leaves of the mown plant fall during machine processing. Unfortunately. this is where the important nutrients for the animals are contained. Here plants operating with hay drying are having advantages as well, because many hay drying systems can dry hay already with a residual moisture of 40% water without being exhausted. It should be noted here that a little more of a weather dependence can be achieved by using a drying unit (dehumidifier/hot air oven).

In the method of drying, so to speak, the litter is separated from the wheat in reference to hay. Machine dried hay has the much larger leaf proportion and therefore the higher energy! Ventilated hay, considered by its ingredients can be absolutely compared with hay from silage.

The crude protein content (g/kg dry mass) indicates the protein supply. This contains anything that contains nitrogen (amino acids, proteins, protide = protein building blocks). In cows, it is generally known that they need half a kilo of protein per day to maintain a healthy self-preservation. For each liter of milk the cow requires 39 g of it.

If one thinks of crude fiber, one immediately considers the stalk of the plant. Fibers are absolutely necessary, so that the cow’s ruminal activity is working properly. Due to the contraction of the rumen which happens once in a minute, the crude fiber has a stinging effect. As a result, the rumen muscle knows that it has to mix. However, a too high crude fiber content can indicate poor feed digestibility. We’re talking about more than 27% crude fiber. Methane is formed by the crude fiber degradation as well.

Sugar is a rapidly degradable carbohydrate fraction in the rumen and is thus a fast energy source. For a high sugar content in the hay (over 13%), the concentrated feeds must be carried out more precisely and in smaller quantities! Excessive values ​​present the risk of rumen oversaturation due to excessive acid production in the rumen. In cases of hyperacidity the bacteria important for digestion die. The formation of toxins must be detoxified by the liver. Too frequent rumen acidification results in infertility and claw disease.

In the case of a feed investigation, the material delivered is burned at 550°C. The residue consists of different minerals and sand. It is assumed that with one kilo of feed max. 100 grams of minerals are contained. If the value of the raw ash is higher than 100 grams, it can be assumed that the remainder is food contamination. Hygienically loaded material creates digestion problems and leads to faulty fermentation in the rumen. With high raw ash content the chance of fungal infestation of the feed is also increasing.

In addition to the crude protein, the convertible energy MJ Nel (net energy lactation) is a value on which the milk output of the cow can be calculated. As a rule of thumb, the cow needs approx. 40 MJ Nel for self-supply. 3.2 MJ NEL (net energy lactation) are required per liter of milk. Every day it is known that one cow eats about 20 kilos of hay per day. Based on this knowledge, the resulting theoretical milk performance can now be calculated (feedable energy + raw proteins + 20 kilo of hay per day = dairy output per day) on the basis of a present feed analysis. And what is even more important is to supplement missing building blocks with power feed.

The last farmers will burn at Christmas

Once again I would like to take a closer look at the residual moisture of the feed. It is absolutely important to bring the feed under a residual moisture content of at least 14%. Self-inflamation of the hay can take place due to the self-heating of the hay. If you suspect a self-inflamation of the hay because of smoky odors in the haystock, the fire brigade has to be informed before further measures been undertaken, which can be started after the fire brigade is in place.
Generally, hay temperature and humidity measuring devices are recommended. These are available in a wide variety of models. I can personally recommend digital devices. These are by no means as sluggish as analog devices usually are and the measured value can be read very quickly.

A high basic feed quality is becoming more and more important while feed prices are on the rise. Feed analyzes can help to better understand their own staple food and to improve their own economic yields through targeted additions. With a high basic feed quality, the cow is ideally supplied with all important nutrients from the outset. It is also assumed that a cow eats up to more than 3 kilos of machine-dried hay. Per kilo of hay, 0.7 kilos of feed could be saved for the same dairy output. Machine-dried hay is comparable to a grass silage on the basis of the ingredients.